Biblical Crossings of Borders and Cultures

The Bible, as a point of contact and as a crossroads of controversy, figures prominently in this issue, with prophetic voices past and present addressing urgent appeals for serious critical reflection and for active engagement in the liberating work of justice. Contributions by a Methodist, a Roman Catholic priest, and an Assemblies of God minister attest to the ecumenical importance of this concern throughout the Americas. All three converge in the shared conviction that authentic and unambiguous fidelity to the truth of the Gospel must combine honest speaking with genuine attention to the voices of the other. The opening article, “Quetzalcoatl Challenges the Christian Bible,” is by Dr. Elsa Tamez (Ph.D., University of Lausanne, Switzerland), a Methodist who is professor at the Seminario Bíblico Latinoamericano in San José, Costa Rica. Dr. Tamez is the author of Bible of the Oppressed (Maryknoll, N.Y.: Orbis Books, 1982)

Tamez
and editor of Through Her Eyes: Women’s Theology from Latin America (Maryknoll, N.Y.: Orbis Books, 1989), and her most recent book, The Amnesty of Grace: Justification by Faith from a Latin American Perspective> (Nashville: Abingdon Press, 1993). Her provocative contribution traces four different attitudes toward the Bible that have developed in the more than five hundred years since the encounter of 1492. She challenges readers to rethink both their biblical interpretation and the Christian practice that draws upon that interpretation by becoming attentive to indigenous voices and traditions. If the present moment can be recognized as a kairos — a privileged time of decision, judgment, and grace — Tamez argues that “the historical challenge comes at this moment,” some five hundred years later, “from the indigenous and African-American peoples who, together with women, are rising up as newly emerging subjects.” In “Amos 5:21-24: Religion, Politics, and the Latino Experience,” Dr. C. Gilbert Romero, a Roman Catholic priest of the Archdiocese of Los Angeles who holds a PhD. from Princeton Theological Seminary, pursues further the insights he developed in his book Hispanic Devotional Piety: Tracing the Biblical Roots (Maryknoll, N.Y.: Orbis Books, 1991). He suggests insights into ways in which connections between religion and politics, between acts of worship and deeds of justice, set forth in the book of the eighth-century B.C.E. prophet Amos, might nourish an understanding of the links between religion and politics in the experience of Latinas and Latinos.

Robeck
Dr. Romero stresses the positive function of Latino popular religion as a resource for self- determination and empowerment in the face of the oppression and marginalization that are the daily experience of so many Latinas and Latinos.

In an essay originally delivered before the US. National Association of Diocesan Ecumenical Directors, Dr. Cecil M. Robeck Jr. presents “Evangelization or Proselytism of Hispanics: A Pentecostal Perspective.” Dr. Robeck, an Assemblies of God minister who is professor of Church History at Fuller Theological Seminary, Pasadena, California, co-chairs the international Roman Catholic-Pentecostal dialogue. In the light of the history of U.S. Hispanic involvement in the Pentecostal movement, he underlines the need for sustained dialogue in arriving at common understandings and in working toward the sort of genuine koinōnia that promotes authentic witness to the Gospel.

From the Editor
Jean-Pierre Ruiz 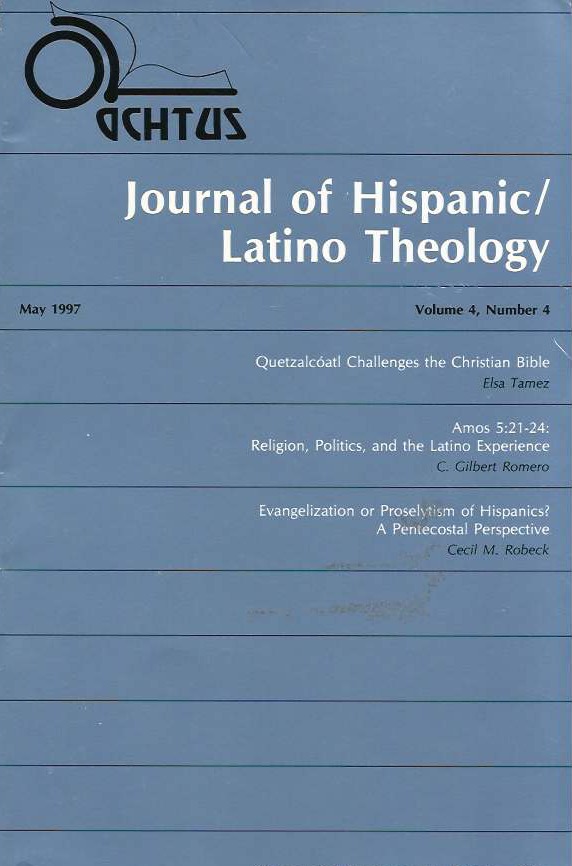 Founded in 1993, the JOURNAL OF HISPANIC / LATINO THEOLOGY is published by ACHTUS, The Academy of Catholic Hispanic Theologians of the United States